The other side of despair 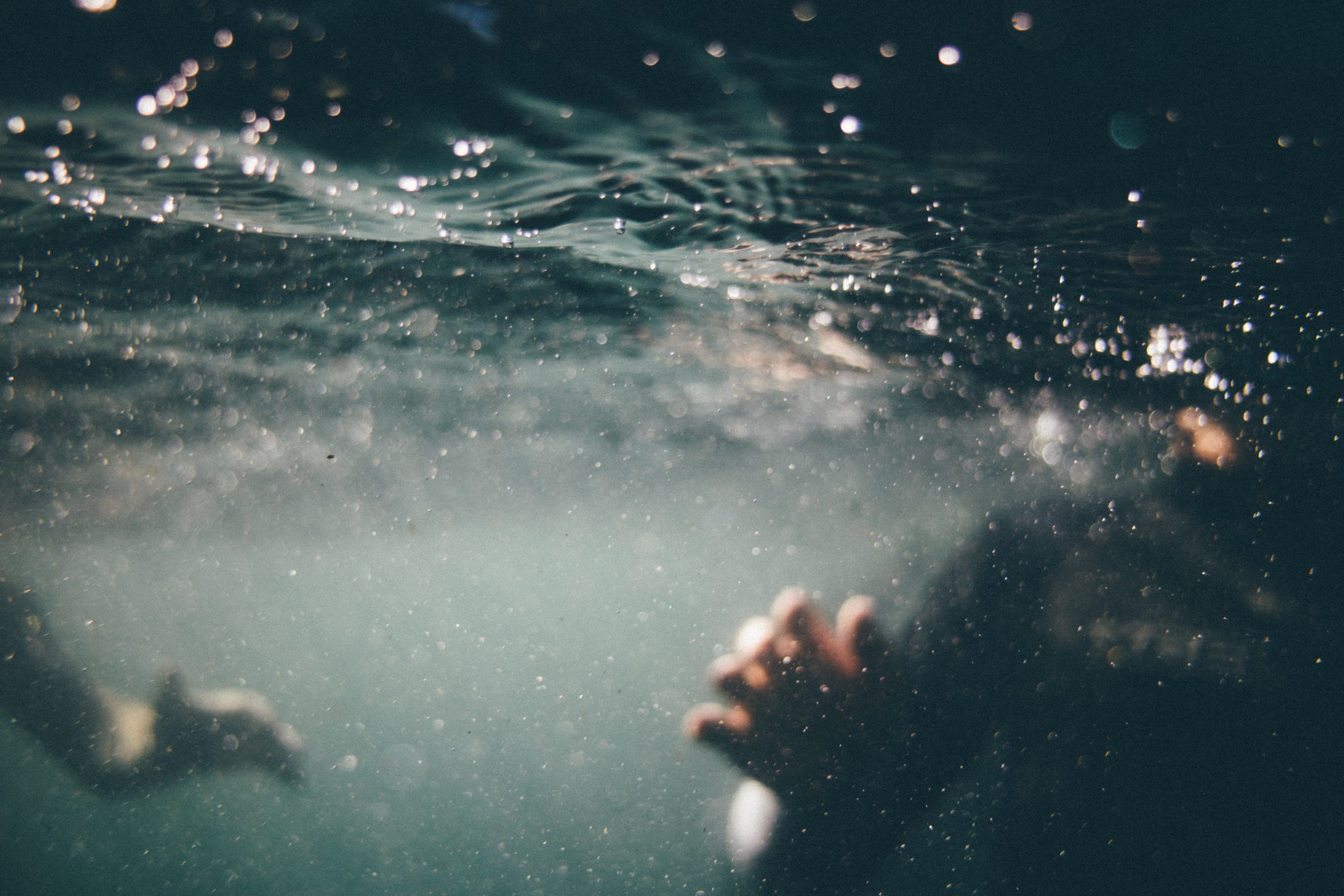 I remember that moment clearly. I was sitting in the rocking chair in the tiny living room of the first home I owned with my ex-husband, I was five months pregnant with my first daughter, and I was in complete and utter despair. I was rocking back and forth, unable to imagine how I would get through that day, let alone the next one and the one after that.

My mom, who had come in from the farm to be with me, was trying to get me to eat, but I didn’t see the point. Why eat to survive a day that pointed toward such a bleak future?

My husband had just attempted suicide. At that moment, he lay in a hospital bed recuperating from the multiple surgeries they had to do to stitch him up. I’d come home briefly for a change of clothes and then was on my way back to the hospital. I couldn’t help but wonder, though… was there any point to the surgeries if he really didn’t want to live?

The depression and anxiety that had brought him to this point had come on like a tsunami, knocking us both off our feet and flooding our lives with the uncontrollable darkness inside his mind. I had tried everything I could to get him the right help – found him a psychologist, took him to an overnight mental health facility – but none of it had kept him from trying to end his own life.

Sitting on that rocking chair, my baby kicking inside my belly, I could see no hope for the future. I had no imagination that would help me see my way through the next day, let alone our whole lives ahead of us. If he lived, I’d likely have to learn to parent next to this uncontrollable darkness for the rest of my child’s life. If he didn’t live, I’d be a widow and a single mom, struggling to give my child a decent life in the midst of my grief.

The twenty-fifth anniversary of that day has just passed a few weeks ago. The baby in my belly is now a beautiful twenty-four-year-old university graduate who’s recently started an exciting job with an arts organization, developing a resource for Indigenous artists. My ex-husband survived, the darkness dissipated, and we had many good years together raising our children. Not only did I live through that trauma, I survived the ones I didn’t know at that moment were in my future – the stillbirth of my son and both of my parents’ deaths.

I got out of bed the next day and the day after that and the day after that. I carried on and kept doing the next right thing, and somehow I’ve found myself in a place where, despite the pandemic, I’m having one of my best years ever, publishing a book and launching a Centre. My life is good – better than I ever could have imagined while I sat in that rocking chair.

(Note: If you want to know more about that story, I wrote about it in more depth in The Art of Holding Space.)

I’ve been having flashbacks to that time, recently, partly because the twenty-fifth anniversary just passed and partly because I see a similar kind of despair and loss of hope in many people on social media during this time of global pandemic and political chaos (especially in the U.S., which spills out all over the world). It’s hard to look toward the future when the pandemic disruption stretches indefinitely ahead of us and there is a risk that the U.S. will once again elect an abusive leader. It’s hard to be optimistic in the midst of this climate change crash course we seem to be on. It’s hard to be optimistic when Black men are still being killed by police and Indigenous women are still at higher risk of being murdered than most of the population.

Recently, Nadia Bolz-Weber shared a Sunday Prayer that read: “Whoever is up there listening, Please save me from catastrophic thinking. Amen.”

“Yes,” I thought, “That’s exactly it.” When we find ourselves in this place of despair and lack of hope, our minds take us directly into catastrophic thinking. We can see only the most horrible outcome, and then we lock onto it like heat-seeking missiles, preparing ourselves for impact. It’s hard to rescue ourselves from it, once our minds are on that crash course, so a little help from our Higher Power might be all we have to lean on.

Catastrophic thinking is, at its core, a failure of imagination and it’s entirely understandable in moments of crisis when we’re stuck in survival brain and can’t engage our higher-thinking capacities. Survival skills reside largely in the amygdala, while the imagination lives in the neocortex and thalamus. The amygdala has this inherent ability to over-ride the neocortex and thalamus – like a crisis manager who pushes aside the dreamers and artists when the moment calls for clear thinking and quick action.

When you’re in crisis, when you’ve just experienced trauma, or when you haven’t gotten enough sleep because of fear or depression or overwhelm or grief, it’s unrealistic to think that you’d have the capacity to dream about a hopeful future. Your brain, in fact, was designed to set that capacity aside in those times.

And yet… those are the times when we most need some of that capacity, because hope and imagination help us survive. They help us put one foot in front of the other and move forward even when our feet feel like they’re trapped in sludge.

When a caterpillar goes into the liminal space of the chrysalis, it loses its shape and substance and becomes something completely unrecognizable – not like its past caterpillar-self and not like its future butterfly-self. BUT… there is one thing that remains constant throughout the process… the imaginal cells. Before it has even hatched from the egg, a caterpillar’s imaginal cells have clustered into discs that will eventually form each of its adult butterfly parts – the wings, eyes, legs, etc. When the caterpillar breaks down into the unrecognizable goo of the chrysalis, these cells hold the imagination of the future and, when it’s their turn, they begin to build that future.

The imaginal cells of the caterpillar help me to find some whisper of hope even when hope seems futile. In the darkest days of liminal space, even when I can’t see any future to cling to, I know that there is something deep inside me, like those imaginal cells, that holds future promise and that will see me through the darkness into the light.

We each have it – something within us that wants to survive, that wants us to carry on into the uncertain future. It’s an inner knowing – even when we don’t KNOW that we know – that we can get through the grief and trauma and fear and overwhelm. It helps us get up in the morning and do the next right thing, even when that thing is simply to pour ourselves a bowl of breakfast cereal to keep us alive.

There is something new that can evolve after a pandemic. There is even something new that can evolve out of political chaos and even collapse. We might not have the imagination to see it right now, but if we lean into the trust that some wisdom deep within us is moving us forward into that future, we can get through these dark days. One day at a time. And then, some day in the future, our imagination will kick in once again and we’ll build whatever life is ours to build.

And… when one person can’t access the wisdom of their own imaginal cells, and they run out of trust in the existence of those cells, I believe that we can be those cells for each other. I believe that we can hold space in such a way that holds onto future promise on each other’s behalf. That’s what my mom was doing as she stood beside me in that rocking chair twenty-five years ago, urging me to eat – for my unborn child if not for myself. She had been through plenty of hard knocks herself and she knew I had the strength to survive it. She also knew that I had the capacity to be a single parent if I needed to be, and that there would be goodness in my future.

Those are the people I want to surround myself with when I am in despair – strong and grounded people who know their own despair and so they don’t judge mine. Resilient and authentic people who know how to listen and don’t rush to fix things I don’t need them to fix. They are the ones who help me find my way through the goo of the chrysalis.

Learn more about liminal space and how to hold it in The Art of Holding Space. And… if you want to deepen your practice, check out our Holding Space Foundation Program.