Rejected. Barriers for entry and how they’re used to uphold systems. 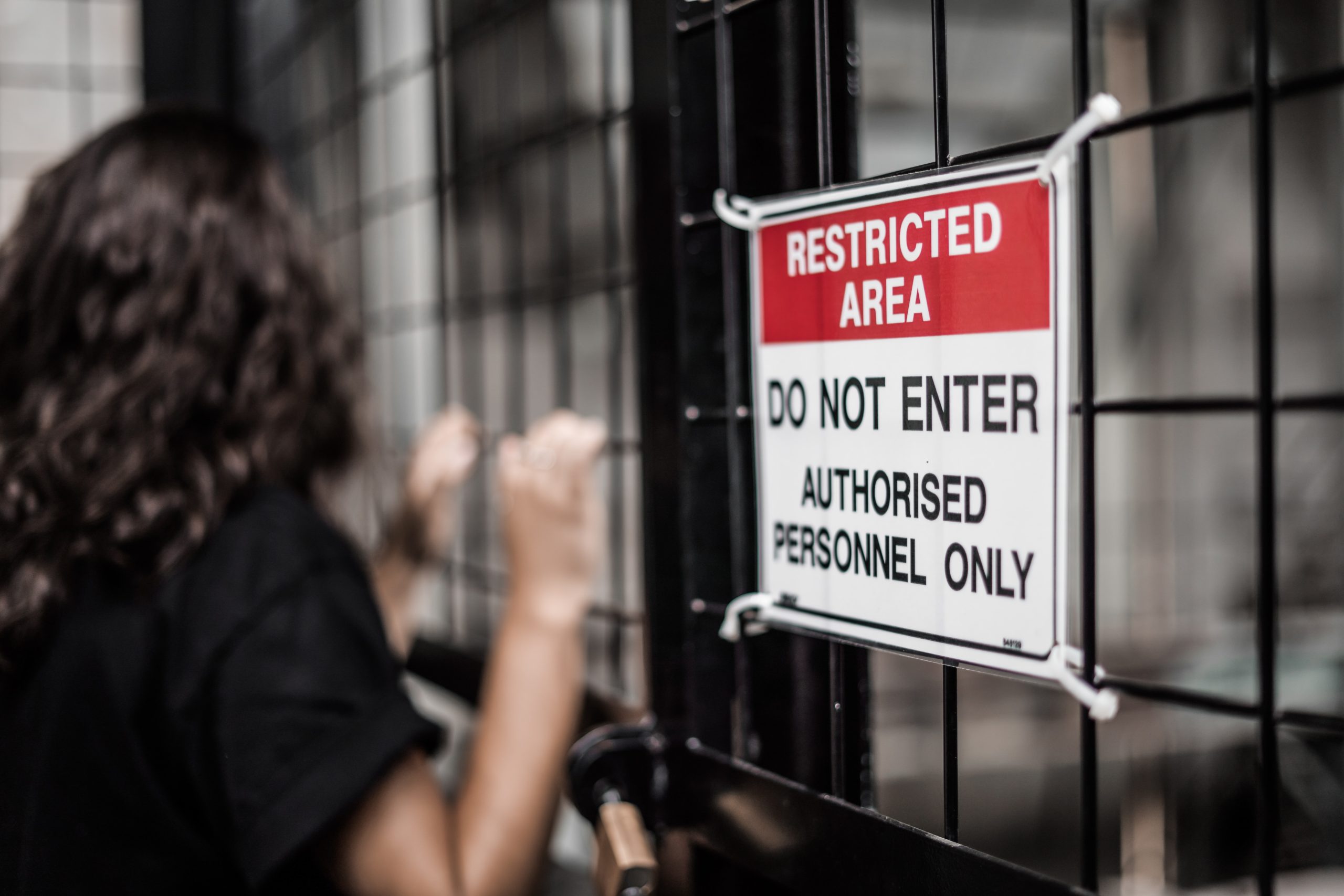 I was in Chartres, France, a few days ago. Everyone who’s been there says that, if I’m visiting the Cathedral, I should do my best to see the crypt. So I did my best.

I wandered around the cathedral, periodically checking to see if the crypt doors had opened. By 2:05, they had not, but I could see a small crowd gathering not too far away. They looked like a tour group, and the guide was speaking French, so I didn’t join them, assuming I didn’t belong. I did, however, decide to double-check at the information booth to see if I could access the crypt and whether I needed a ticket. “Ask at the gift shop,” the ticket agent said, so I asked at the gift shop. She glanced at the clock and said, “You’re too late.” I was puzzled, since the doors hadn’t opened yet, but she turned fairly quickly to another customer, and I knew I’d lost my small window of opportunity to get more information.

When I turned to leave the cathedral, I saw that the crypt door had opened, and a man was ushering the people from what I thought was a tour group in. I rushed over to him and said “Can I go in, or is this only for a tour group?” He looked at me impatiently and said “You can go in, but you need a ticket.” Seeing that he was about to close the door, I asked quickly “If I go back over to the gift shop, can I still get one and come in?” Making a gesture of impatience, he grabbed the big metal door and said, “You’re too late.” Then he slammed the door in my face.

When I walked out of the cathedral and into the sunshine, some big emotions showed up. It wasn’t disappointment, though – I didn’t really care about seeing the crypt, since I’d already seen several cathedrals in the last few days (including La Sagrada Familia in Barcelona), and have only a limited interest in old churches and religious art. No, what I was feeling was more like grief.

That man, slamming the door in my face because I hadn’t followed the rules I didn’t know existed, seemed to tap into years of grief – over all the times in my life I’ve been kept on the outside by some institution, in-group, system, etc., because I missed some of the nuances of the often-unspoken rules for entry.

I have childhood baggage around not knowing the rules for entry. Growing up in a subculture that kept itself intentionally set apart, for religious reasons, I often found that when I tried to fit in with the culture at public school, I was missing some of the information needed. We didn’t have a TV, so I could never join the conversations about what people had watched the night before. We didn’t go to community events like dances, bingo nights, fowl suppers or fair days, so I was often missing from the spaces where friendships were built and cultural rules were established. I felt, again and again, just like I felt when the man in the crypt slammed the door with impatience – I was kept on the outside.

Since then, I’ve come to learn that there was another reason why I missed some of the social cues and other information that kept me from feeling like an insider. I am neurodivergent. My brain doesn’t process information the same way that neurotypical brains do. I miss things and I jump to different conclusions. (Admittedly, I also see things that lots of people miss, but that’s a story for another time.)

Of course, because I didn’t yet have the wisdom to see the big picture, I processed it the only way a child knows how to process it. I internalized it as shame, assuming that there must be something wrong with ME.

It wasn’t just in childhood – there have been many moments in adulthood when I’ve similarly felt like I’ve been left on the outside of social groups, institutions, religious organizations, etc. because I didn’t understand the rules for entry and because my brain processes information differently. And always, that childhood shame resurfaces. I now have far more capacity and wisdom to see the bigger picture and to forge my own path even when other paths are closed to me, but I still almost always have to soothe the little girl in me who assumes there must be something wrong with her.

As I walked through the streets of Chartres, processing the grief that had come up, I thought about how often institutions, cultural groups, schools, churches, etc. create barriers for entry that allow certain people access and keep other people out. Often, it’s done intentionally and without malice, because they want to build cohesiveness and community in the in-group, or they can only serve a certain amount of people and have to be selective about who gets access. (We all do this, to some degree, whether it’s in our friends’ circles or our small businesses or churches – consciously or unconsciously, we choose who has access to us and who doesn’t.)

Unfortunately, this kind of exclusivity has a way of becoming systemic and that’s when it becomes especially problematic. When a health care system, for example, is designed to give easier access to those with money and education, and those who fit the gender binary, then it creates barriers for entry for anyone who is poor and/or uneducated and/or gender non-binary. When an education system is designed primarily to educate white children, then it creates barriers for entry for anyone who’s not white. These systems are usually unconscious of what barriers they’ve created because their focus is myopic and they can only see the people whose needs they serve well. But not only do they make rules about who gets in and who’s left out, they make the rules easier for some to understand and follow then they are for others.

Extrapolate that even further and we end up with the harmful, oppressive macro-systems that are currently shaping culture, like patriarchy, white supremacy, and colonization. These systems were all designed to give certain people access and keep other people out, because those with power wanted to hoard resources, protect their rights and privileges, etc. Once set in motion and embedded into a culture, these macro-systems become blind to the barriers they create because they’re doing what they’ve been designed to do and serving the people they’re designed to serve. The people within the system become blind to it to, because it’s the only thing they know, and they assume there is no other way.

What happens when we attempt to disrupt those systems? Well, the systems are designed to protect themselves, so they institute ways to keep people in line and punish disruptors. That’s when we end up with police forces that are particularly brutal to people marginalized by the system, like Black people in the U.S. or Indigenous people in Canada. And we end up with cultures where people police each other and are cruel to offenders, the way we often see on social media. And we end up embedding perfectionism into the culture, and we teach people to punish themselves (and each other) in order to keep the system going.

Like the man at the door keeping me outside of the crypt, we convince people they’re “doing a good job” when they enforce the rules to protect those with privilege. I’m sure he meant no malice – he’s just doing what he’s being paid to do.

I expect that I will continue to have experiences like I had at the crypt. I’m going to keep missing the cues and falling short of the expectations for entry into some spaces and groups. I’ve learned to be okay with that, because… honestly? Those are no longer spaces that I want entry into. I have outgrown and out-healed my need to be validated by them. I’m not going to waste any more energy trying to be worthy of the systems that aren’t designed for me anyway.

Instead, I’m putting my energy into co-creating spaces that have tenderness and liberation at the centre. I’m going to work on doing whatever I can to build alternatives, where people feel welcome and loved instead of measured and judged.

This is the work of holding space. It’s why the Centre for Holding Space exists. It’s why we train people every year in the art of holding space. We are intentionally divesting ourselves of the systems that are built on the marginalization and policing of certain people, and we are doing our best to co-create spaces that don’t follow the rules of those systems.

We don’t have a “crypt” at the Centre for Holding Space, but if we did, and if you wanted to enter it, we’d do our best to make sure you had the information you needed to get in. And we wouldn’t shame you at the door for not knowing the secret code.

← The Path to Liberation and Tenderness Starts with Holding Space